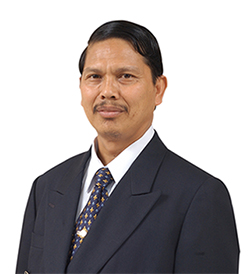 Professor Datuk Dr. Mohd Ruddin assisted in the development of the Polytechnic staff Training Centre (PLSP), now known as the Universiti Tun Hussein Onn Malaysia (UTHM), and the Malaysia Military Academy, now known as the Universiti Pertahanan Nasional Malaysia. He was the pioneer in the establishment of Kolej Universiti Kebangsaan Malaysia (KUTKM) in 2000 of which he later joined as a professor at the Faculty of Electrical Engineering. Soon after, he was appointed as the Rector of KUTKM of which he served until 2004.

Throughout his tenure, Professor Datuk Dr. Mohd Ruddin has received numerous accolades at the national and international levels. He was also very active in research activities. He received several grants at the national and international levels worth more than RM4 million and conducted over 25 research projects. He is known for the establishment of MOSTI’s framework of research and development grant which consists of Science Fund, Techno Fund and InnoFund while serving as the Parliamentary Secretary of MOSTI in 2004-2008.

He has produced nine monographs and books, over 150 journals and proceedings at the national and international levels, and holds the copyright and patent of iRemote Terminal Unit (iRTU). He has also received numerous awards, namely the ‘2014 Invention Academics Order of Merit Award’ at the 2014 World Inventor award Festival, Korea and the Gold Medal Award in Invention 2013.

As an academician, Professor Datuk Dr. Ruddin holds firmly to the principle that it is the responsibility of an academician to continuously work towards holistic excellence in acculturating knowledge especially in the areas of science and technology for the benefit of all. As the first Rector of KUTKM he is all set to assist in his capacity towards realizing UTeM’s vision to emerge as one of the best technical universities in the world. Currently, he is a Fellow (FASc) of Akademi Sains Malaysia (ASM) and chairs the University Professor’s Council of UTeM.