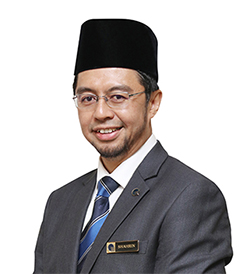 Professor Datuk Ts. Dr. Shahrin Sahib, FASc was born on 23 July 1968 at Kampung Sepinang, Segamat, Johor. His passion has always been in the area of academics, to be a scholar and an expert in the area of Information and Communication Technology especially in Networking, Computer Systems, Security, Network Administration and Design through working, teaching and undertaking research in those areas.

His illustrious journey in the academic arena started with a Bachelor’s Degree and a Master’s Degree from Purdue University, United States in the area of Computer Systems Engineering, followed by a PhD in the area of Parallel Processing from the University of Sheffield United Kingdom in 1995.

His contribution in academia began in 1997 when he served Multimedia University for 4 years after which he joined Kolej Yayasan Melaka as the Founding Director of Academic Affairs. In 2002, Shahrin started his academic career at Universiti Teknikal Malaysia Melaka (UTeM) where he held several prominent posts including as the Deputy Dean at the Faculty of Information and Communication Technology (2002) Dean of the Faculty of Information and Communication Technology (2006), the Deputy Vice-Chancellor (Academic & International) (2013) and eventually as the Vice-Chancellor in 2014 till present. Prior to his appointment as the Vice-Chancellor of UTeM, he served for a short stint as the Director of Academic Development Management at the Department of Higher education, Ministry of Education in 2012.

As an academic, he has published over 100 technical papers at international conferences and journals. He has supervised more than 40 projects for undergraduates and postgraduates programmes. He is also actively involved in many committee and subcommittee as the chairman, co-chairman, panel, and advisory council at the state, national and international levels. He has contributed his knowledge and experience as international program committee, reviewer and resource person in numerous research events.

His expertise in curriculum development is frequently sought for by the Malaysian Qualification Agency (MQA) at which he sits in the Accreditation Committee and Chair the Computing Standard Committee. Besides contributing to the development of Malaysian Critical National Information Infrastructure (CNII) Policy and the National Cyber-Security Policy (NSCP), he also contributes to Cybersecurity Malaysia as a Member of Malaysia Common Criteria (MyCC) Scheme Management Board. His current area of interest is in the field of Network and Computer Security.

In recognition of his academic achievements, research and administrative experience, Professor Datuk Dr. Shahrin bin Sahib, FASc was appointed as the 3rd Vice Chancellor of Universiti Teknikal Malaysia Melaka (UTeM) on 16 June 2014 to lead UTeM to its pinnacle of excellence as one of the best technical universities in the world with his vast experience in the technical and technology field.