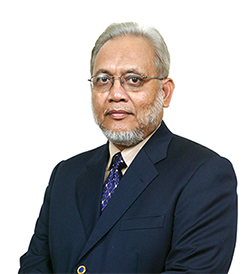 Professor Datuk Ismail started his academic career as the Head of Department (Electrical Power) at Universiti Teknologi Malaysia (UTM) in 1976. He was later appointed as the Deputy Dean of the Faculty of Electrical Engineering (1978), and soon after as the Dean of the same faculty in 1988. In 2001, he joined UTeM (known then as KUTKM) as the Deputy Rector (Academics) and was then appointed as the First Vice Chancellor of UTeM from 2004-2008.

Throughout his career as an academician, Professor Datuk Ismail held various significant posts at the national and international levels. He was a Member of the SIRIM Technical Committee, Member of ITM Curriculum and Electrical Power Engineering Syllabus Advisory Committee and a Member of the IEEE Malaysia. He was also actively involved in supervising undergraduate and postgraduate students in their researches as he too undertook several research projects which include, “Solutions of Electromagnetic Fields, Hydrothermal Plant Optimization, Power System Stability Studies Using Micromachine Set” and “Development of LV and HV HRC fuse”.

In the area of consultancy, Professor Datuk Dr. Ismail rendered his expertise through consultancy projects such as the “500 kV Transmission System Development’ for Ranhill Corporation/Black Veatch International and TNB, whereas the “Liwagu 275 kV Transmission System Development’ was executed for Ranhill Corporation/Lahmeyer Germany and Sabah Electric Council. As for publication, Professor Datuk Ismail has published numerous high impact journals and articles in his field of expertise of which have become a source of reference and much cited locally as well as abroad.